During the world’s biggest arms fair, Israel and its arms companies will have a ‘National Pavilion’ and boast about their ‘field tested’ weapons systems: used to devastate and destroy Palestinian families and communities. Join us for a day of creative action to Stop Arming Israel. 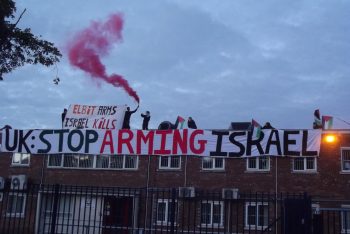 In 2014 Israel carried out its deadliest assault yet on the people of Gaza. In 51 days:

Since 2006 there have been six full scale military attacks on Gaza by Israel as well as its siege: turning Gaza into an open air prison subject to daily sniper, drone and gun boat attacks. In the occupied West Bank and East Jerusalem, military occupation is maintained with the same weapons and armaments displayed at DSEI.

Join groups and campaigners for the Palestine Day of Action on Monday 7th September 2015. Together we will transform the space outside ExCeL into a place for hope and freedom to challenge the Israeli and international arms companies’ pursuit of colonialism and death for profit.

Palestinian civil society has called for a two-way arms embargo on Israel to end the import and export of weapons & components to and from Israel. The UK & EU have spectacularly failed to act and halt the flow of weapons: but we will answer the Palestinian call to Stop Arming Israel.

September 7th will kick off a week of action in the run up to the arms fair, to make it as difficult as possible for DSEI to go ahead. Find out about other protests planned.