The History of DSEI 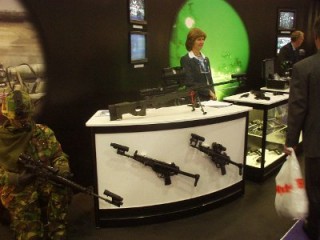 DSEI just doesn’t seem to be able to keep out of trouble. Since the arms fair was created out of the old British Army and Navy equipment shows and with UK arms control laws leakier than a sieve, DSEI has increasingly come to reflect the increasingly profit-oriented, international bent of the arms trade, where anything can be sold to anyone- as DSEI’s controversial history shows:

DSEI opens it’s doors on the same day as the September 11th atrocities. While the world watched the pictures from the Twin Towers aghast, inside the ExCeL centre the arms fair was in full swing. One person present remembered it as “surreal.  Utterly incredible and shocking…the arms dealers were still driving up. That disgusted me more than anything.” [“It opened my eyes. I realised I had to do something.”, CAAT Blog]

DSEI’s organisers ask companies not to bring cluster munitions to DSEI as these are “not suitable for the UK market”. [Cluster bombs shut out of arms fair, Guardian.co.uk] Even so, The Guardian find cluster munitions on offer at DSEI under a different name by Israel Military Industries Ltd.

The weapons were especially embarrassing as the British Army had recently been using them in the Iraq war- the Ministry of Defence said the army fired more than 2,000 Israeli cluster munitions during the battle for Basra. [Welcome, This Way for Cluster Bombs, Guardian.co.uk]

Cluster bombs remain on offer although the company offering them, Denel, reassuring say “I believe we would only export them to stable, mature sort of countries”, and a DSEI spokesman attempted to give some perspective by pointing out “there are far worse weapons, you know” [Cluster bombs on offer at arms fair despite sales ban, Independent.co.uk].

One third of all recorded cluster munitions casualties are children. The comedian Mark Thomas is offered electro-shock weapons (classified torture equipment in UK) by three companies at the fair. [Further memorandum from Mark Thomas, Parliament.uk]

DSEI opens once again in the ExCeL centre, despite a unanimous vote from the local council condemning it. In a report on DSEI, Newham council said “we felt considerable disquiet that an international arms exhibition should be held in a borough which celebrates the fact that over half its residents come from diverse cultural backgrounds.

We also considered it inadvisable to hold such an exhibition on and around 11th September. We further questioned the wisdom of holding such an event in a residential area”, noting that “the people of Custom House had to bear the brunt, from school children to the elderly”.

The invite list for DSEI sports an all-star cast of dictatorships and human rights abusers with official invites for the fair, including Colombia, China, Iraq, Pakistan, Saudi Arabia and Vietnam- all of whom are identified as “major countries of concern” in the Foreign Office’s Human Rights report and despite China being under an EU arms embargo since the Tiananmen square massacres. Angola was invited despite widespread poverty and being in the process of reconstruction following 40 years of conflict. [Buyers at DSEI, CAAT]

The fact that Bahrain, Egypt, Saudi Arabia and others had all turned their weapons on civilian populations to suppress democracy protests since the start of the year was no deterrent to inviting them to shop for more at the arms fair. Caroline Lucas MP exposed that illegal cluster munitions were once again being promoted at the fair. A diverse week of protests and direct action took place.