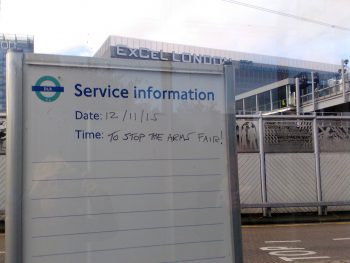 Following five days of disruption to the set up of DSEI, Saturday 12th September brought together the different themes from throughout the week, and a huge range of groups and individuals, to stand united against the arms fair. It was a packed day of workshops, speeches, performance, and effective action. There was far too much activity to fully report on here, but the below hopefully gives a flavour of the day.

As activists flocked in from across the country, the day kicked off at the Eastern roundabout, where members of the Occupy camp reflected on their experiences camping outside the Excel for the past week. Members of the camp worked with other groups to set up a welfare space and information point for the day, welcoming newcomers to join them in their ongoing occupation. This was followed by talks from members of a number of other groups, recapping on the various actions that had taken place on each of the past five days. 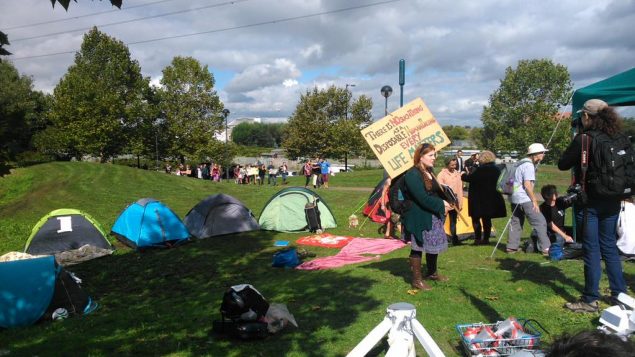 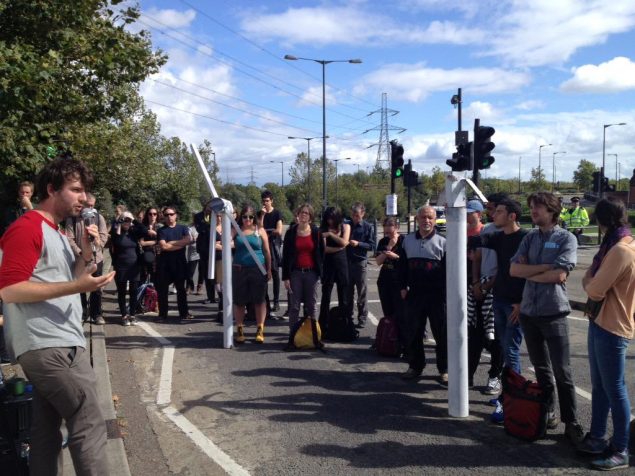 It seems there is only so long that you can be nostalgic about blocking the arms fair before – you guessed it – blocking the arms fair. As a lorry laden with equipment and destined for DSEI came into view, over 100 activists descended into the road to chants of “repression starts here… lets stop it here!”. 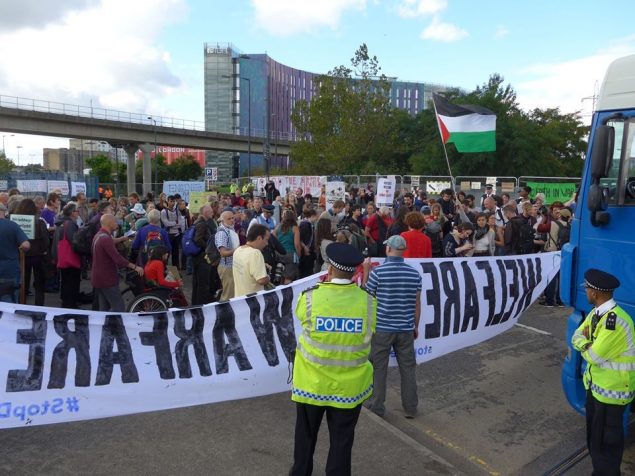 With lock-ons quickly put in place, it wasn’t long until traffic destined for the arms fair was backed up as far as the eye could see, leaving the Eastern gate to the Excel Centre well and truly blocked! 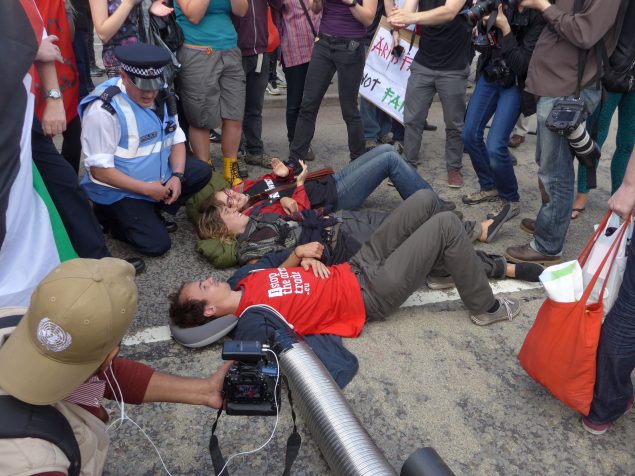 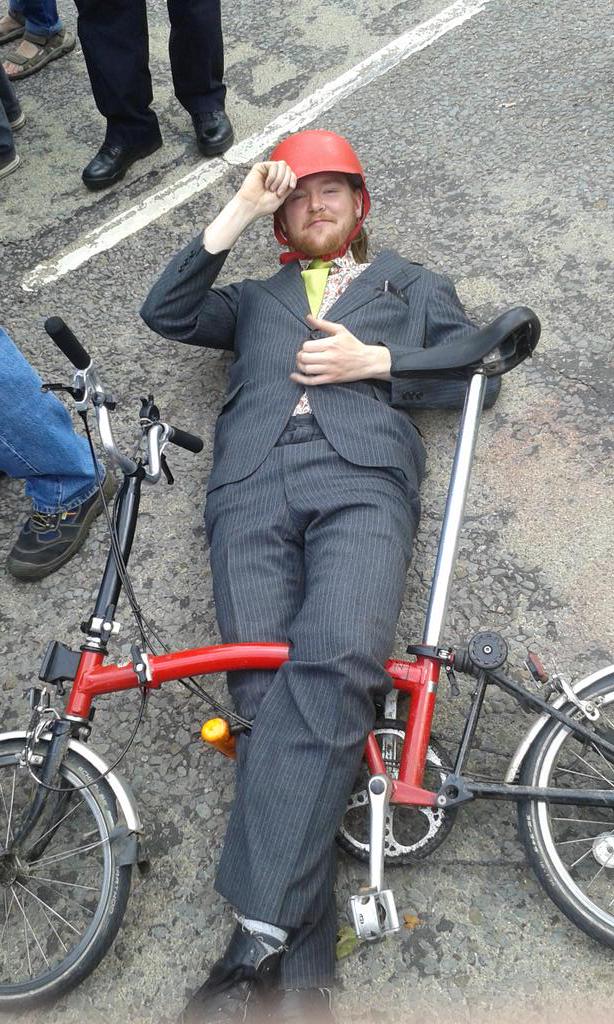 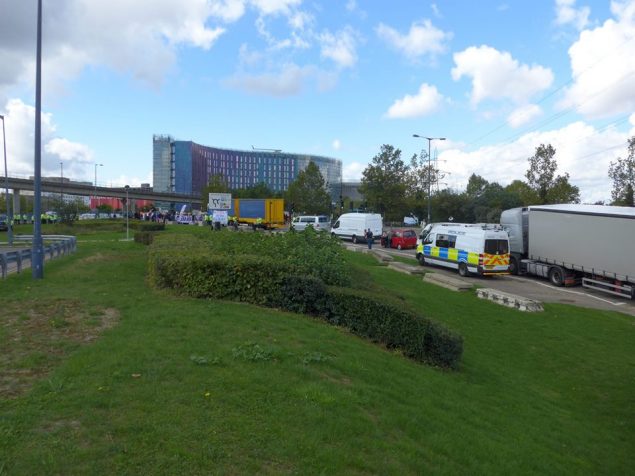 Over at the Western entrance, more activists were starting to arrive including a ‘critical mass’ of cyclists against the arms trade. 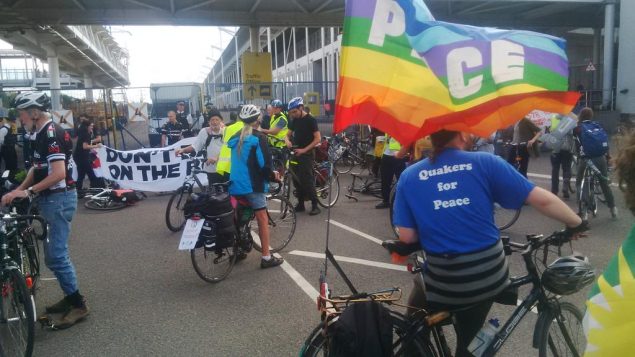 …And it wasn’t long until that gate was fully locked down too, leaving the arms fair entirely inaccessible. Delivering weapons? Not today thanks. 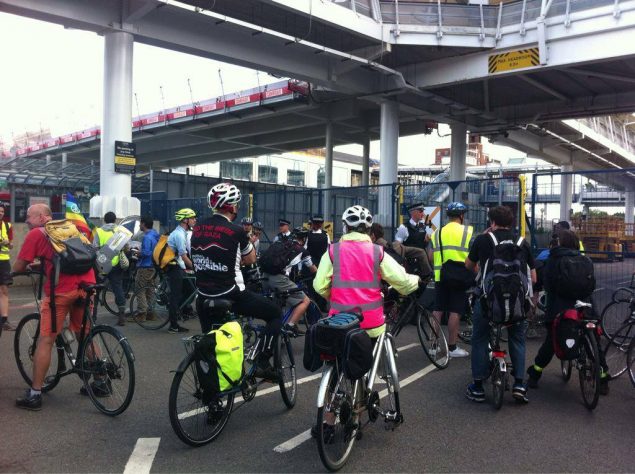 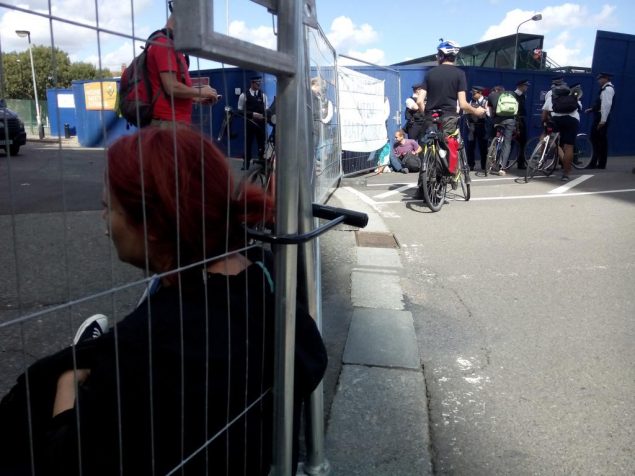 What followed was a day filled with song, dance and talks from local, national and international groups, as the arms fair remained locked down.

We heard first hand accounts on the links between companies exhibiting at DSEI and oppressive governments in various countries including Mexico, Bahrain, Egypt and Turkey.

There was also an open mic throughout the day and a huge range of faith groups, musicians and poets ensured the energy of the crowd was kept up. 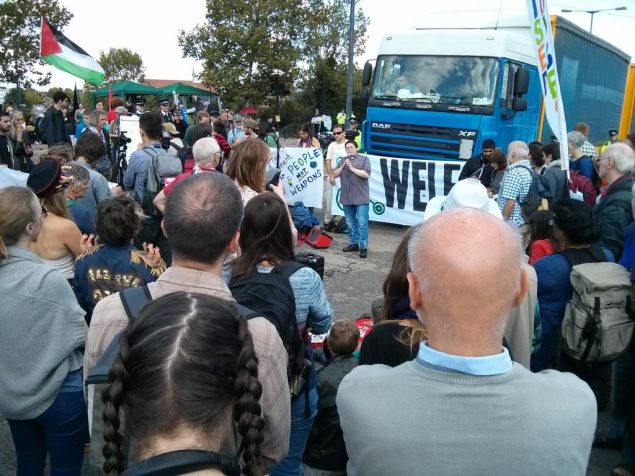 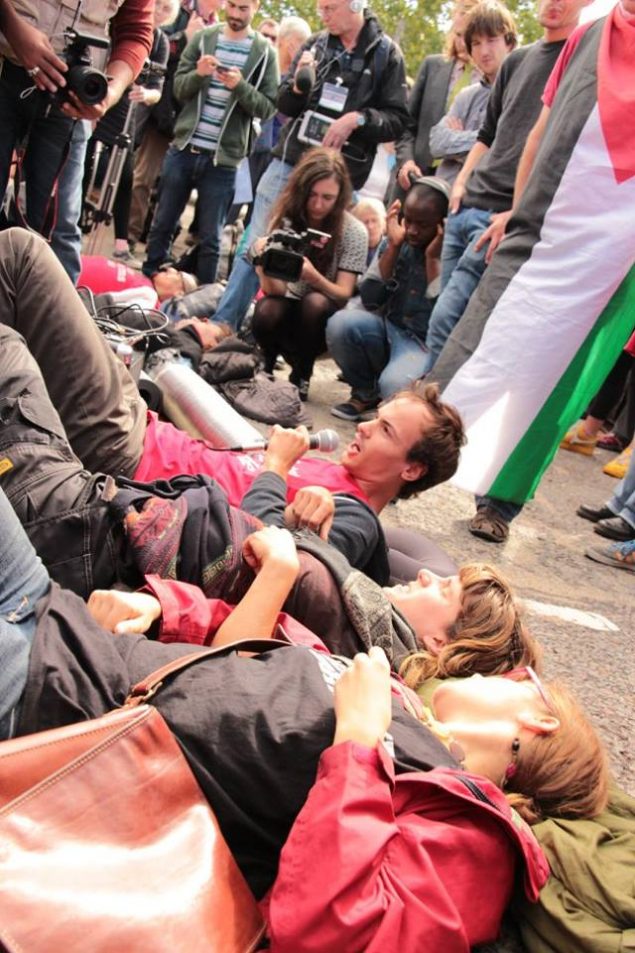 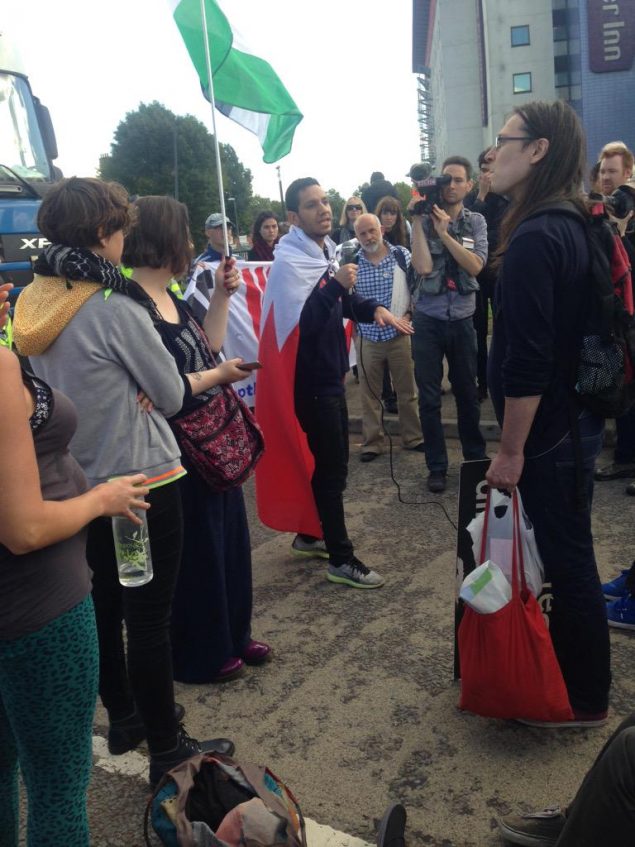 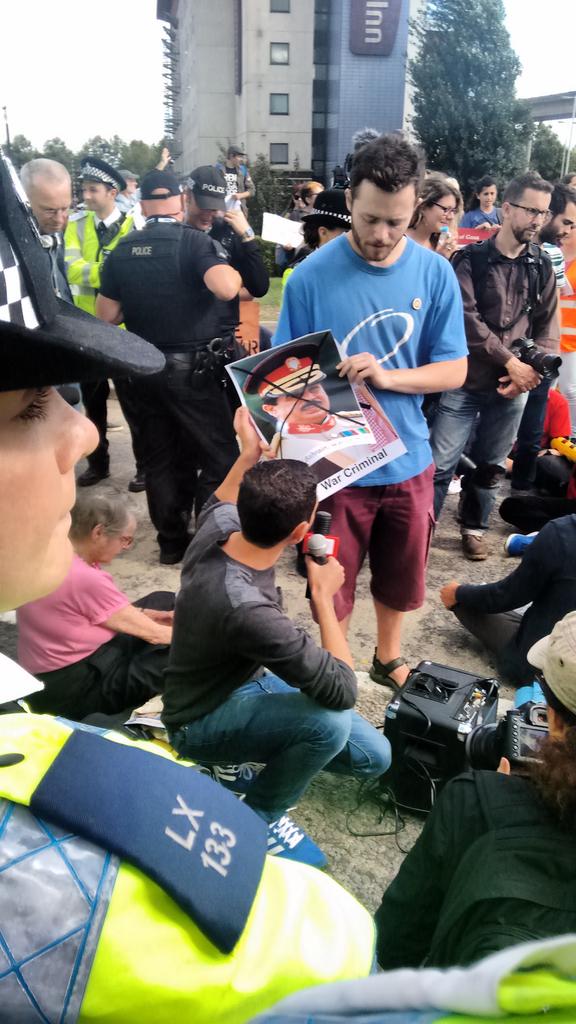 The crowd were defiant, blocking both entrances to the arms fair for five hours despite ever increasing police presence and intimidation. It was only as the number of police officers rose to equal, if not more, than the number of activists that they started to have any success in clearing the road.

Even at this point, the crowd held strong as hundreds of activists sung “where is the love?” and many questioned police on why they had chosen the side of human-rights abusers, war criminals and arms dealers. 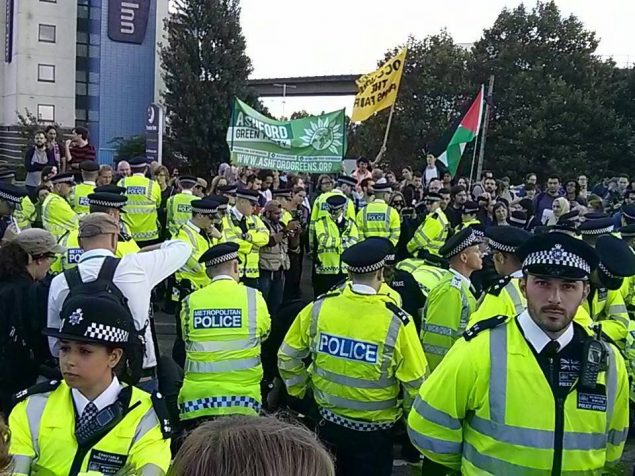 The final part of part of the blockade proved particularly hard to move, with courageous Belgian activists remaining locked on until industrial equipment was brought in to remove them. 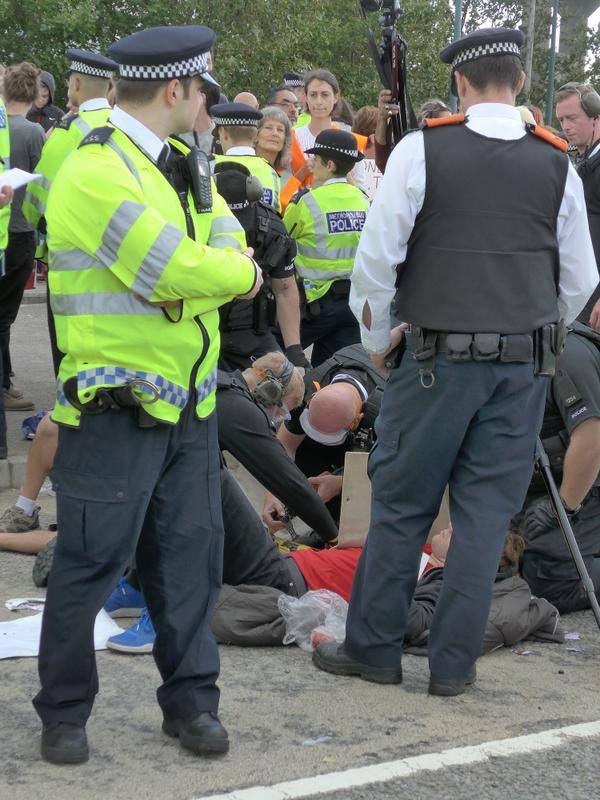 Even after the road had been cleared, many remained outside the Excel sharing ideas, singing and making friends. As well as causing chaos for the organisers of the arms fair, the day of blockades had clearly been an empowering experience for many attendees, inspiring them to link up with other groups and continue to build a mass movement against the arms trade. 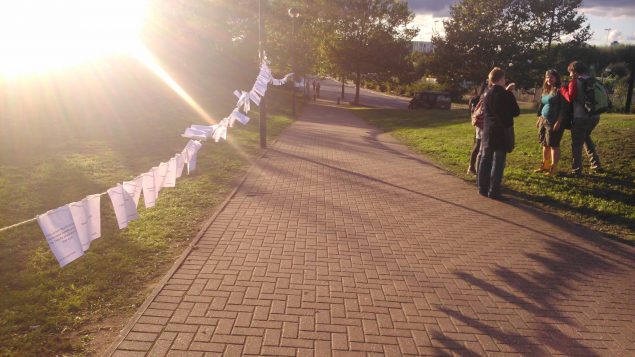 Finally, as the sun set over the Excel Centre, protesters left their mark by hanging personal messages from over 2000 people calling on the Prime Minister to cancel the arms fair. 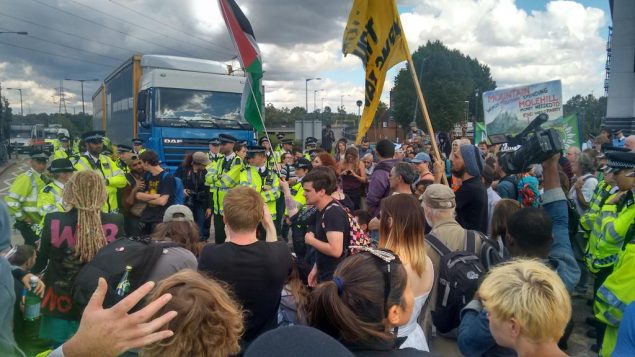 Thanks to all involved in such an amazing day and week of action. As DSEI opens it doors this week, more demonstrations are planned, so keep checking our events page for more information.