Speech read by a member of Black Dissidents during the ‘Free Movement for People, Not Weapons’ day of action

Responsibility of the trade of arms falls on the entire G8, Canada, France, Germany, Italy, Japan, Russia, the UK and the United States. It is no surprise that these countries facilitate the movement of people freely, the movement of arms freely, as well as having little regard for climate change. 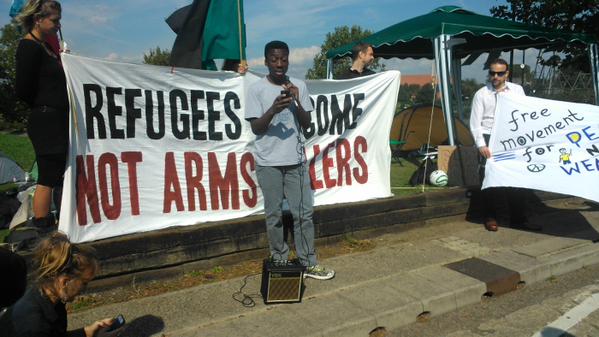 Migration, as we know it today, Forced Migration – is a by-product of the pursuit of profit by these people in power. Europe, defined by supranational imperialist borders has seen migration for centuries, from the fall of Al-Andalouse to the fall of the Berlin Wall. In recent years, there has been a reformation of  racial whiteness, cultivated by western Europe, othering all those which fall outside of this definition of a ‘European’. Migration therefore, and the defence and acceptance of migrants is tied to the experience of people of colour throughout Europe.

When the national media portrays good and bad migrants, they also categorise good and bad people of colour. Owning papers and passports mean nothing in the face of racism, and the racism we see now is creeping from between the lines to the forefront of national vernacular.

Elevating migration as a priority is crucial in the fight against anti-capitalism. Understanding the history and root causes of migration is understanding state violence, institutional racism, and abuse. We are witnessing an exercise of superiority in terms of capital translating to access. Access of territories, access to impunity, access to trade and profit. This grow steadily, year after year from the European Governments to multinationals which use their cross border powers to trade on the destruction of people, who are mainly people of colour.

The European standpoint on migration utilises control under white supremacy, neoliberalism and patriarchal hegemony, the effects of which manifest into criminalisation of migration, and of people of colour. We must not only call for no borders, no deportations, no detentions as an attempt to redistribute power, but call for the end of such prevailing superiority.

The rhetoric around ‘attacking innocents’ also needs to be addressed. Arms and violence that come from large scale weapons and attacks are horrific on the innocent – but they are horrific in general. Just like we must challenge the notion of the good migrant bad migrant, we must also distinguish between the innocent and those who sign up to fight. In cases where arms are used, Palestine, or Kobani, freedom fighters are not included in this so-called definition of the ‘innocent’. We must challenge the trade of weapons by the global elite, and their monopoly of language in describing the conflicts, as well as and the use of our resources in conflicts that cause more death and more poverty.

We believe it is not unrealistic or idealistic to demand such things, capital and the elites enjoy free movement, which is free from criminalisation and discrimination. This must be extended to us all, or abolished. There must be a redress in the power, there must be a redress in the distribution of capital, there must be an end of the destruction caused by elites gambling with people’s lives. We must be clear, the only reason these lives are disposable are because they are predominantly people of colour. It is easy to dehumanise people, who are never seen as human to begin with.

If countries are embroiled in a western-fuelled armed conflict, people will flee. They will flee to safer places. European governments have ensured that if they arrive here, they will not be safe. They will suffer the risk of deportations, detention centres, or raids. They will be scrutinised on the basis of their stories, or their age. While the privilege sell their weapons, and move freely, trans people are detained, queer people have to prove their sexuality, deaths in detention occur in parallel to deaths in custody, and privatisation of services by global security firms such as G4S, or Serco are left unaccountable with impunity. Migration is interwoven within tax/capital, education, even basic civil liberties which are made for all, and given only to some. We need not a discourse around hope, but rather, in outrage and responsibility.

It is not only people in far away lands that are affected by the transactions and movements of the global elite. Every pound spent on arms is one that is not spent on welfare, on health, education. Every pound spent on destruction is one less for preparing housing and essential services for all of us here. All of us here are paying for the atrocious crimes which will occur as a result of the deals made in there.

Europe must no longer be seen as a solely white hegemonic resource rich landmass. The face of Europe is changing, and we can change its gaze.

No replies to “Migration and institutional racism: statement by Black Dissidents”