The world’s biggest arms company, Lockheed Martin, is a key player in the UK’s nuclear weapons industry. It manufactures the missiles and manages (along with Jacobs and Serco) the nuclear bases at Aldermaston and Burghfield where the warheads are designed, manufactured and refurbished. Another huge arms company, Rolls Royce, manufactures nuclear fuel rods at their plant in Derby. The involvement of these companies in the UK nuclear deterrent allows them a huge amount of influence over the government, which in turn seeks lucrative export deals for them. All of these companies were at the arms fair in 2015 and plan to be there again this September.

Join the action saying no to nuclear weapons and no to the arms fair.

Exhibitors at this years’ arms fair are the key figures behind multiple nuclear weapons systems:

Lockheed Martin – Lockheed Martin is the main partner in AWE-ML, the company that manages the UK’s Atomic Weapons Establishment (AWE). The AWE is responsible for the maintenance of the warheads for the UK’s Trident nuclear arsenal and manages and operates the AWE sites at Aldermaston, Burghfield, and Blacknest.

BAE Systems – BAE Systems is the biggest UK arms company and subject of successive corruption and bribery investigations, it will provide the submarines that will replace the current ‘Vanguard’ subs that carry the UK’s Trident nuclear missile system. It is also the prime contractor for the US Minuteman III Intercontinental Ballistic Missile (ICBM) system and part of the joint venture providing medium-range air-to-surface nuclear missiles for France.

Thales – Thales is part of a joint venture to build the M51 submarine-launched nuclear missiles for the French navy.

General Dynamics – General Dynamics provides a range of engineering, development, and production activities to support to US and UK Trident II Strategic Weapons Systems. It is also involved in the guidance systems of the Trident II (D5) nuclear missiles of the US Navy.

MBDA Systems – MBDA Systems is a joint venture between BAE Systems (37.5%), Airbus (37.5%) and Leonardo-Finmeccanica (25%). It supplies the medium-range air-to-surface missile system that deliver much of the French nuclear arsenal.

Moog – Moog developed the launch vehicles and strategic missile controls for the Minuteman III (US) and Trident (D5) (US & UK) missiles.

Northrop Grumman – Northrop Grumman has provided the original launcher system of the Trident II (D5) since the 1980s. In December 2013 it was awarded a US$ 112.9 million (€ 82.5 million) contract for ongoing support to the Trident II (D5) Underwater Launcher System and Advanced Launcher Development Program Support for the US and the UK. Together with partners Babcock & Wilcox, Aecom and CH2M Hill (also exhibiting at DSEI 2017), is a joint venture partner in National Security Technologies (NSTec). Since 2006, NSTec manages the Nevada National Security Site (NNSS), previously known as Nevada Test Site.

Raytheon – Raytheon is currently involved in a project to stretch the lifecycle of the guidance systems of the Trident II (D5) nuclear missiles of the US Navy. It is also involved in studies in support of the new W80-4 Long-Range Standoff missile for the US arsenal. 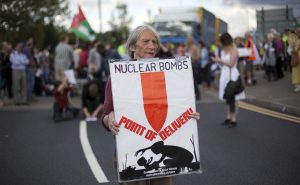 ‘No to Nuclear’ day

This year Campaign for Nuclear Disarmament (CND) is working with Campaign Against Arms Trade (CAAT) and Trident Ploughshares to organise a ‘No to Nuclear’ day at the DSEI arms fair in London. Matt Fawcett from Yorkshire CND explains. The Defence & Security Equipment International (DSEI) is the world’s largest arms fair, held in London every... 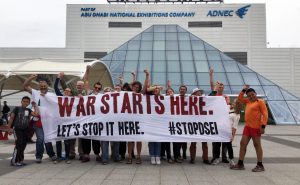 Military delegations from around the world will head to London for Defence & Security Equipment International (DSEI) – the world’s biggest arms fair – on the 12-15 September. Many of these delegations will be from countries with abominable human rights records. At DSEI, they will meet weapons industry salespeople who will have filled the ExCeL... 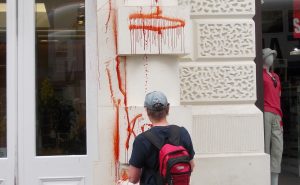 Activist due to appear in court for Lockheed Martin protest

An activist is due to appear in court on Tuesday 24 November for an action at Lockheed Martin’s London offices during the DSEI arms fair. There will be a solidarity presence outside the court from 9am Where: Westminster Magistrates Court, 181 Marylebone Road NW1 5BR When: Tuesday 24 November, 9am 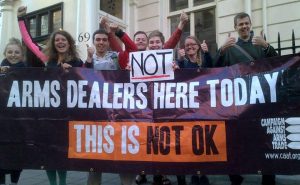 A year of protest against the arms trade

When tackling the systems that perpetuate conflict, repression and inequality, change doesn’t come quickly, so it’s important to remind ourselves of our achievements along the way. 2013 was a brilliant year for anti-arms trade activism: Arms trade networking events were challenged wherever they took place; a wide range of groups took part in an amazing... 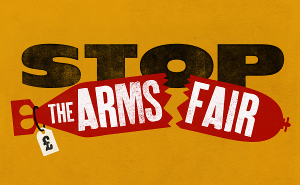 We will defend our right to challenge the arms trade! A group of activists (mainly women) were charged after taking part in the ‘Occupy v the Arms Fair’ day of action on 8 September, which was part of the week of action against the DSEI Arms Fair at the Excel Centre, London. Our intention was... 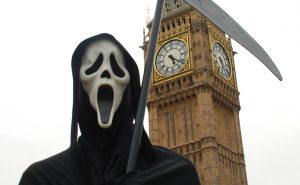 Everything you ever wanted to know about the arms fair

Over the past few months, we’ve collected some gems on our blog. Naturally, we didn’t want you to miss out, so see below for a categorised list of posts to whet your lips before the arms fair starts… Intersections with other struggles Palestine: The UK’s dirty secrets: Palestine and the arms trade // Israel’s booming... 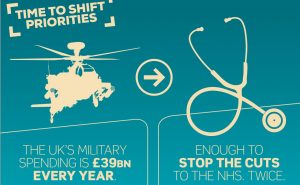 Who pays for high military spending?

We need to make explicit the choices our politicians are making: They are choosing to protect military spending from the cuts and to keep the UK’s spending on weapons the fourth highest in the world, while subjecting public services to vast cuts.

Sara Medi Jones, CND Campaigns Officer writes about the companies at the arms fair which are pushing for the UK to renew its nuclear weapons system: Weapons companies are due to descend on London in September for the world’s largest arms fair. This ‘fair’, a pleasant sounding term for what really is a market for...
Page 1 / Page 2 / Next »